You are here:
A social tour will be arranged for delegates and their accompany to the Upper Ganga Canal System and further to Har – ki – Pauri at Haridwar. 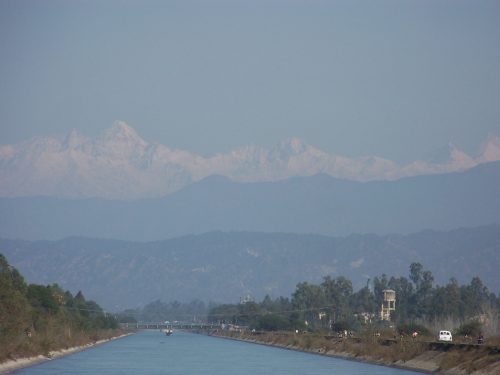 Upper Ganga Canal System
The Upper Ganga Canal begins at Hardiwar and with its branches have a combined length of 5,950 miles (9,575 km). The construction of Upper Ganga Canal was conceived and constructed by Proby T. Cautley during the period 1840- 1854. Mr. Proby T. Cautley designed and constructed a versatile network incorporating almost all types of engineering cross-drainage marvels and regulating structures. The Upper Ganga Canal takes off from the right flank of Bhimgoda barrage which replaced the old weir at Haridwar in 1991-92. The canal with a head discharge of 190 cumecs (6750 cusecs) presently provides irrigation in a gross command area of about 20 lakh ha. in 10 districts of Western Uttar Pradesh. There are 4 major cross drainage works in initial 36 kms of the main canal namely Ranipur Syphon, Pathri Super Passage, Ratmau Aqueduct and Solani Aqueduct. The flow in canal and fall due to terrain condition has been utilised to locate hydropower projects which supplies electricity in neighbouring areas. The main branches are : Deoband branch, Anupshahar branch, Mat branch and Hathras branch taking off from Mat branch.

Har Ki Pauri (Hindi: हर की पौड़ी) is a famous ghat on the banks of the Ganges in Haridwar in the Indian state of Uttarakhand. This revered place is the major landmark of the holy city of Haridwar. Literally, “Har” means “Lord Shiva” who is the god according to shaivite Rishav Bhagwan school of Hindu theology, “Ki” means “of” and “Pauri” means “steps”. Lord Shiva and Lord Vishnu are believed to have visited the Brahmakund in Har Ki Pauri in the Vedic times. There is a large footprint said to belong to Lord Vishnu on a stone wall.It is believed that it is the precise spot where the Ganges leaves the mountains and enters the plains. The ghat is on the west bank of Ganges canal through which the Ganges is diverted just to the north. Har Ki Pauri is also the area where thousands of pilgrims converge and the festivities commence during the Kumbha Mela, which takes place every twelve years, and the Ardh Kumbh Mela, which takes place every six years and the Punjabi festival of Vaisakhi, a harvest festival occurring every year in the month of April. During visit we will stay for Ganga Aarti. Each evening at sunset priests perform Ganga Aarti here, when lights are set on the water to drift downstream. A large number of people gather on both the banks of river Ganges to sing its praises. The priests hold large fire bowls in their hands, the gongs in the temples at the Ghat start ringing and the chants flowing out of lips fill the air. People float earthen Diyas, with burning flickers and flowers in them as a symbol of hope and wishes .The golden hues of floral diyas reflected in the river Ganges presents spectacular view.